Feeding on the living

A zombie, refers to most humans that have succumbed to the Tyrant/T-Virus, Chrysalid/C-Virus and Animality/A-Virus (either through contaminated water supply or via bites and scratches from a virus carrier). They serve as universal antagonists of the Resident Evil franchise.

The researchers at Umbrella, called them "zombies" due to their slow pace, mindless nature, similarity to the modern-day concept of a zombie in 20th century cinema, and the fact that they are walking dead corpses. Like their horror film counterparts, zombies spread the virus through biting and are walking corpses, due to the fact that individuals die before turning into zombies.

The Hippocampus suffers from severe necrosis due to infection bt T-Virus, meaning that a zombie's memories and spacial navigation skills have been compromised. This led the zombies reduced into mindless, instinctive undead that consume any uninfected lifeforms that stood on their way similar with zombies that featured in George Romero's Living Dead Series. Also, they can make noises such as grunting and moaning instead of actual speech due to the same brain damage as well.

In situations of lack of nutrition due to the unavailability of live prey, Zombies resort to cannibalism, consuming other Zombies or infected corpses that have yet to reanimate. However, upon noticing live prey, a Zombie will cease cannibalism and turn attention to the live prey.

Some Zombies lay dormant on the ground due to their lack of nutrition, but will bite anything that comes to their direction. These Zombies that play dead can be easily spotted, as their heads usually follow prey's movements. The intro of Raccoon Zoo scenario shows that the zombies will also feast on the flesh of non-humans animals.

A Zombie's eyes are covered by a white or gray film of mucous either covering the entire eye or just the pupil, as the eye is a sensitive mucous membrane and turns almost entirely into mucous when dead or rotting.Their body also begn to rotting and had some wounds, especially the wounds that they received from another zombies' bite that they received when they still alive.

Due to the necrosis throughout their bodies and the degradation of the nervous system, Zombies move very slowly and awkwardly, leading to their signature shuffling gait and their easily avoided lunges. However, there are also some Zombies capable of moving faster due to less advanced degradation. In addition, in some cases, the zombies will rush quickly at their prey even if they are under severe degradation. Not being able to feel pain due to degradation of the nervous system, a Zombie can resist several gunshots from a typical small-caliber handgun before falling down.

Due to their diet, the body of a Zombie begins to over-produce stomach acids in order to dissolve the meat quicker. This leads to Zombies sometimes vomiting the acid.

A Zombie can continue to pursue prey even after losing limbs or the lower half of its body. Zombies that have lost the use of their legs (either through deterioration or damage) instead crawl after prey until it can grab the target and bite into the leg.

The only way to kill the zombies are by decapitation, complete destruction of the brain or complete incineration of the body.

The Zombies encountered in the Spencer Estate and in Africa appear to be much weaker and not as phsyically active as previous infectees. They lie on their backs, sometimes moaning or moving slowly. But once a potential victim approaches, they spring up with a grab attack, which can be avoided. Zombies die from any attack, be it from a weapon or melee attack and cannot chase after prey.

Start of the Zombies

During his trials with the t-Virus, Dr. James Marcus began to consider the impact that human testing would have on his research, eventually forcing people into being guinea pigs for his secret bio-weapons projects. The result of these trials were the very first zombies. It would appear that information regarding Marcus' deeds only surfaced during the 1998 investigation into his laboratory, which had been quickly abandoned ten years prior when he was murdered. The investigation revealed no less than twenty people as test subjects.

An incident happened in the lab at the Spencer Mansion. The latest strand of T-Virus leaked and every inhabitant got infected, thus turning them into walking corpses. It was revealed that the "resurrected" Dr. James Marcus was responsible for the t-Virus outbreak that ravaged the mansion as an act of revenge against Oswell Spencer for having him assassinated ten years earlier, thus beginning the events of the Mansion Incident.

Sometime after the Mansion Incident, Umbrella Scientist William Birkin successfully completed his work on the G-virus, or commonly known as the G-Virus. Intending on selling his creation to the U.S. Millitary, Umbrella turned against him and sent a U.S.S. unit to recover the G-virus. They discovered Birkin in his lab preparing to escape, and during the subsequent scuffle, an overeager operative shot Birkin. As Birkin lay dying, the operatives took the virus samples and fled the lab through the vast, secret sewer system beneath Raccoon City, specifically the R.P.D. Before his death, Birkin successfully injected one of the G-virus samples into his body and transformed.

Birkin then went on a rampage and chased the U.S.S. soldiers out of the lab and into the sewers, killing them there and destroying the vials containing the "G" and t-Viruses. The released virus spilled into the sewers and led the sewer rats to ingest it by both consuming it and feeding on the bodies of the U.S.S. The rats then began spreading it to the surface, while the rest leaked into the city's water supply, infecting the inhabitants of the now-doomed Raccoon City.

Almost every single person in Raccoon City were ether killed or reanimated. The only (known) survivors of the incident were Leon S. Kennedy, Jill Valentine, Clair Redfield, Sherry Berkin, and Carlos Oliveria. A missle was later launched into Raccoon City, destroying the entire city completely.

Zombies appears in the movie Resident Evil Degeneration involving Leon and Claire from a remaining of the T-Virus from Frederic Downing.

The outbreak happened into the international airport.

After long since Raccoon City, Chief Advisor Derek Clifford Simmons and Neo-Umbrella leader, Carla Radames created newly C-Virus to infect every living things to zombies and as Raccoon City once did. A lot of survivors in the America are killed and infected. Leon and his newly partner Helena Harper fight to safety to confront Simmons. While Carla successfully enhanced the C-Virus with Jake's antibodies, she bombed in China to infect the Chinese civilians into zombies.

An arm dealer known as Glenn Arias has developed a virus known as the A-Virus to turn inhabitants into zombies for his attempt revenge on the U.S Government for bombing his wedding. Leon was assigned for his mission in DC until his entire unit were wiped out. While Chris and his BSAA squads were ordered to save the residents until it was too late and all of Chris' squad were killed and BSAA arrive and killed the zombies to rescue him after was ambushed by Arias. In Rebecca Chambers' university, her students and staff were infected except for Rebecca when she used an antiviral agent and was rescue by Chris and BSAA. After Rebecca was captured by Arias, Leon and Chris fight off against the zombie horde and dogs to reach Rebecca and Chris cured Rebecca just in time. After killed Arias, Chris and the BSAA spreads the antiviral to the whole country to cured the infected people back to normal. 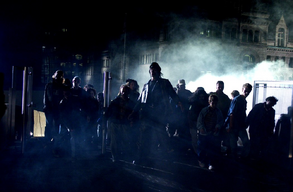 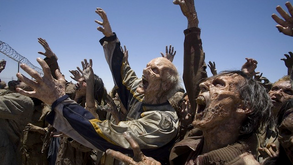 A Horde of Zombies from Resident Evil: Extinction 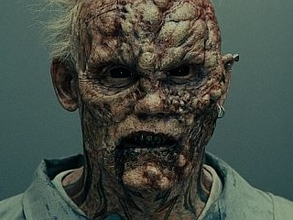 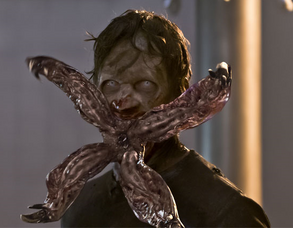 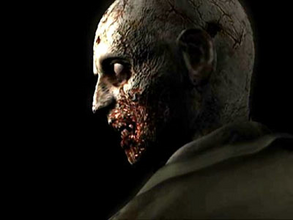 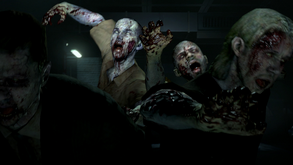 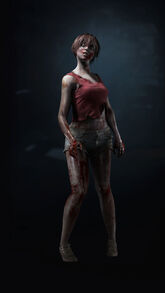 A female Zombie from Resident Evil 2 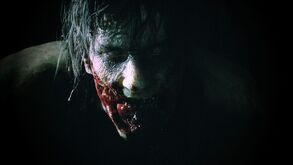 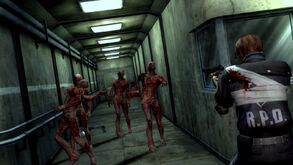 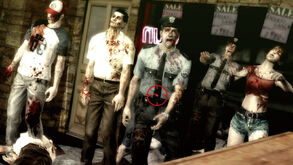 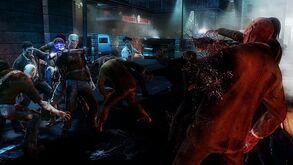 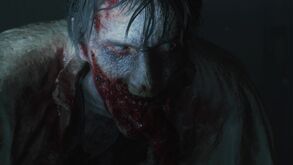 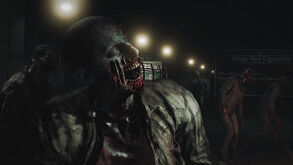 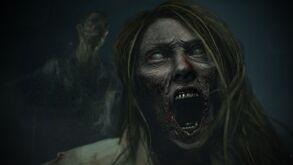 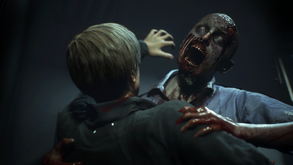 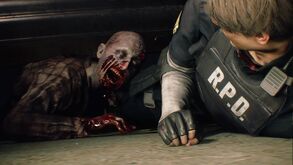 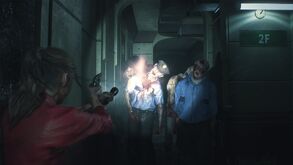 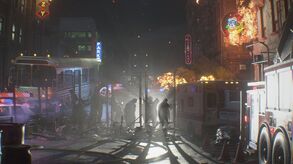 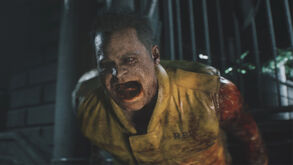 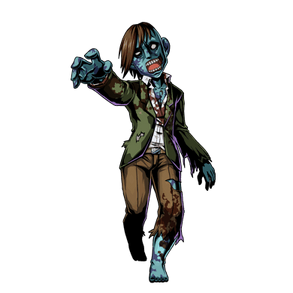 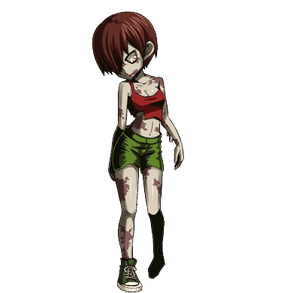 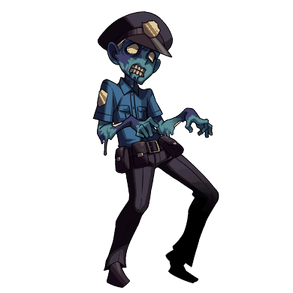 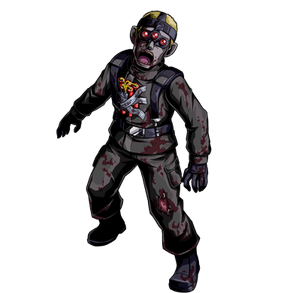 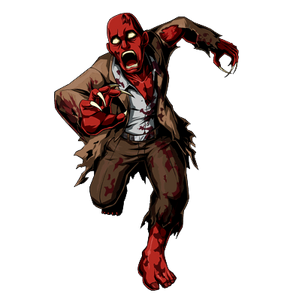 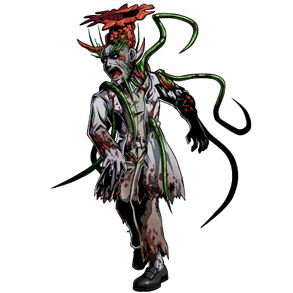 The First Zombie in the reboot film trailer.