Kill those who disturb them.

The Zombies are minor antagonists in the 2003 Disney live-action film The Haunted Mansion, based off of the attraction of the same name in Disney Parks. They are a group of a dozen or so skeletal zombies resting in the Gracey Manor graveyard's mausoleum.

Like the other ghosts and undeads in the mansion, the zombies were cursed to suffer life after death. They remained undead corpses in the mausoleum. It was during this time that the butler Ramsley presumably hid the key to his trunk of secrets in with them, having them guard it from anyone trying to discover his secret.

Years later, after the Evens family is stranded in the manor, Madame Leota tells them that in order to solve the mystery of the mansion, break the curse, and save protagonist Jim Evens' wife Sarah from death, they needed to find the key. Jim and his daughter enter the mausoleum to find the key, which they find clutched in the hands of a corpse in a coffin in the center of the room.

As soon as the key is removed, the corpse awakens and attacks, causing the key to be dropped and the daughter to have to go into the foul water below the mausoleum to look for it as Jim fends off the zombie.

However, upon knocking off the creature's head, the coffins lining the mausoleum walls begin to shake as the zombies within begin to awaken and break out.

More break through the walls and attack the daughter, but she manages to get the key and escape. Jim fights off as many of the monsters as he can, then the two run to escape up the stairs. However, unseen forces slam the mausoleum door closed and lock it, resulting in Jim's son having to open it from the outside. However, the handle is covered in dozens of spiders, scaring the son.

Jim and his daughter pound on the door and plead with the son to open it as the zombies advance up the stairs trying to kill them. The son finally works up his courage and opens the door so his family can escape, but a zombie reaches through the door and attempts to grab them. The three push together on the door, finally slamming it closed and causing the zombie's lifeless arm to come off and fall to the ground.

After the curse is broken, it is assumed the zombies died for good. However, as some spirits and undeads remained even after the curse was broken, this is uncertain. 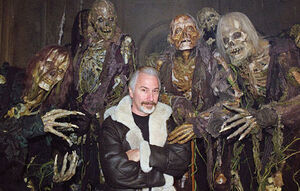 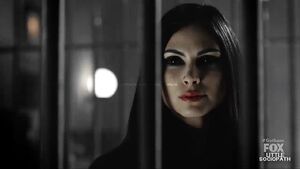 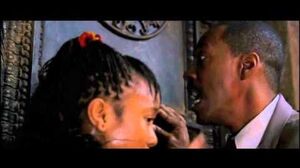 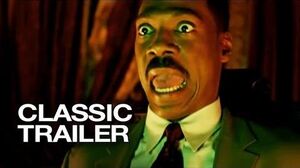 The Haunted Mansion (2003)
Add a photo to this gallery