Drain the happiness and life energy from people for him to "eat".

Herbert J. Zomboni, better known as Zombozo, is a recurring antagonist in the Ben 10 series. A psychic vampire, he poses as a major threat to Ben Tennyson, due to his fear of clowns.

Despite being a minor antagonist in the original show, Zombozo played a key role by introducing the Circus Freak Trio, who later became recurring villains. His episode was also the first one to hint the existence of Ghostfreak's true form, possibly anticipating the Zs'Skayr storyline.

Long before the events of the series, Zombozo was a man named Herbert J Zombini who worked in a school caffetteria. He developed a hatred of children, who mistreated him. At some point, he was bitten by a zombie and then left for dead. However, he didn't die and was ultimately rescued by a circus, presumably the same one which hosted his shows in his first appearance. However, the damage was already done and Zombozo became a half-zombie mutant. He now had the need to feed on emotions of fear and happiness in order to prevent himself from weaknening. However, by feeding on enough emotion, he could gain supernatural powers. After becoming ringmaster of the circus, he replaced the former performers with the Circus Freak Trio, three mutant humans with freakish powers, and repurposed the circus to steal money and other valuables while also allowing him to feed on happiness by making his audience laugh. He would perform for audiences while allowing the trio to steal while everyone was inside watching the show.

In the episode "Last Laugh", Zombozo uses his shows to use his "Psyclown", which robs the unlucky person of their joy and life energy for the clown to eat. While this is happening, his minions rob people in the town. Although not majorly powerful, he posts a mental threat for Ben, due to his coulrophobia. However, Ben manages to steel his nerves after seeing his family in danger, and uses Ghostfreak to make the clown explode. He is not seen again for the remainder of the series.

Zombozo makes his long awaited return in the episode "Hit 'Em Where They Live". After Ben's identity is revealed, Zombozo decides to attack him with several of his other foes, such as Sevenseven, Charmcaster, and Vulkanus. After forming a team with the later two, he uses a captive Sandra as a trap, bringing them to his lair to attack them. He tries to kill Sandra in a torturous way, but this fails as Gwen becomes furious at the site of her pain, transforms into her Anodite form, and yells at the clown to leave both the Tennyson's and Kevin Levin familys's alone. After this, she lets him live to tell any other villain the same thing.

Making his first appearance in "The More Things Change: Part 1", Zombozo first steals a brain from the "Brain Bank". However, he is stopped by Lodestar, beaten, and is taken away.

Next, he appears in "Special Delivery", where he is seen in Psyphon's auction. Once Psyphon notes the Dwarf Star is missing, he goes with Fistrick and Trumbipulor to find it. However, he is beaten by Armodrillo, and after he teams up with Psyphon to stop Ben, Humungousaur.

He makes a final appearance in the episode "Something Zombozo This Way Comes", where he escapes from Plumber Headquarters by putting a costume of himself over Jerry and putting him in his cell to fool everyone. Bringing back his lackies, he and his goon feeds on people's fear, turning them into zombies. Zombozo regains his power due to Ben's remaining fear, but destroyed the machine after seeing Toepick, who he fears. He then escapes using a cannon.

Cunning, manipulative, sadistic, and cruel, Zombozo is a vile man who enjoys gallows humor, and using Ben's fear for his own gain. In Ben 10: Ultimate Alien, he is more psychopatic, using weapons to torture Sandra to death and possibly burying someone alive, as he mysteriously carries a shovel in one scene.

Zombozo never or rarely attacks alone, always gathering together a crew to do his dirty work for him. Originally, this was his Circus Freak Trio and later Zombozo leads a coalition between Vulkanus, Charmcaster and Sevenseven (and eight others who were all warded off by Max before he was injured fending off Sevenseven).

Often using machines to do his dirty work, Zombozo can also teleport in a puff of smoke or confetti and creating illusions. He also has a set of comedy based weaponry, such as caltrops, acid in a seltzer bottle, streamers made from steel, a extendable arm to grab people, a enhanced joy buzzer, dynamite, and a large hammer. He also has the ability to fly by holding a flying toy airplane. 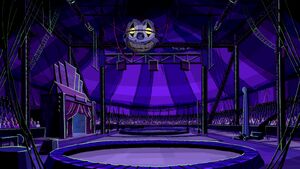 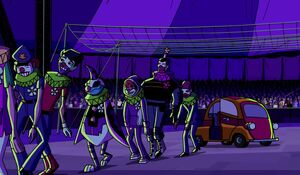 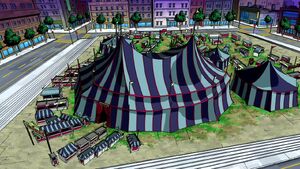 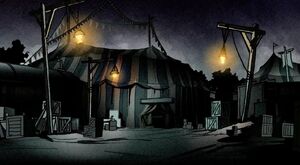 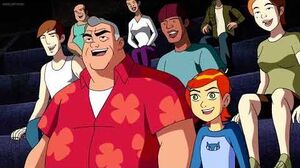 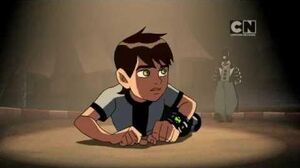 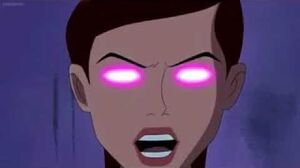 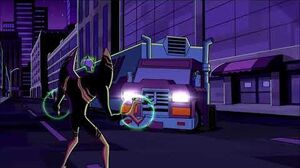