Zomom is a member of the Deadly Six and one of the antagonists in Sonic Lost World.

He is voiced by Patrick Seitz in English and Chafurin in Japanese.

After Sonic defeats Zazz and goes to the second level, Dr. Eggman sends Zomom after Sonic. Zomom would often make comments about eating Sonic. Sonic defeats him twice, after which he recklessly knocks away the conch Eggman was using to enslave the Deadly Six, causing them rebel against Eggman.

Zomom was present when Zavok attempted to transform Tails into a brainwashed robot. However, he left one of his sandwiches next to him, which Tails used one of its toothpicks to reprogram the computer.

Zomom attacks Sonic and Eggman alongside Zazz, nearly killing Eggman. Together with Master Zik, they attack Sonic in Zone 1 of Lava Mountain. Again, Zomom is the second to fight Sonic, and Sonic defeats him and he explodes in a puff of smoke.

Zomom's entire body is somewhat circular in shape, giving him a rather chubby appearance. His upper body is a vibrant orange color. His thick arms end with equally large five-fingered hands with yellow nails. His lower body is pure black, and Zomom's legs are so stubby to be nearly nonexistent. His flat feet are each tipped with a pair of yellow claws, with a third on the heel. Zomom appears to have some sort of stubby tail.

Zomom has thick yellow lips and he appears to be missing some teeth and others seem chipped. However, unlike the other Zeti, Zomom's teeth are square in shape instead of sharp fangs. He has small red eyes with yellow sclera, with black markings surrounding each eye. Zomom is fully bald, unlike the other Zeti. On the top of his head Zomom appears to have four relatively short yet sharp horns, each one being striped black and red. He wears a pair of black bracelets with grey spikes on his wrists.

Zomom is an extremely greedy, ravenous, and gluttonous Zeti with an unlimited appetite, who will eat everything in sight. His favorite food appears to be sandwiches, which are usually abnormally large (particularly one which is several times as long as a person is tall that he is eating when Sonic enters Zone 4). He is very unintelligent, somewhat bumbling, and slow. Aside from this, Zomom and the other Deadly Six are apparently detrimental and malicious by nature, desiring to destroy the world as soon as they broke free from Eggman's control.

He's also very sensitive about his appearance if he's being called fat he gets enraged. 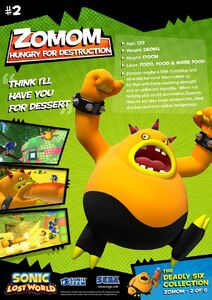 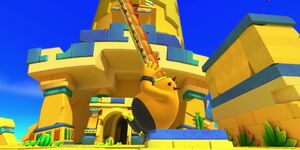 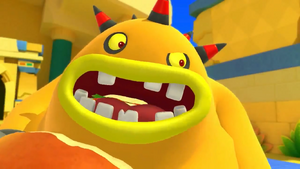 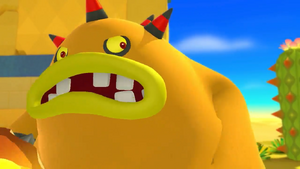 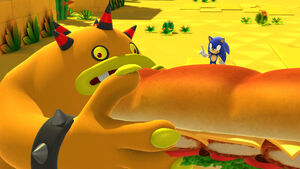 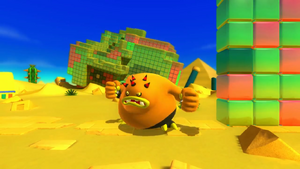