Find a cure after he was infected with the Sakutia virus (succeeded).

Kill Beast Boy to cure himself of the Sakutia virus.
Help Alexander Luthor Jrs.'s Secret Society of Supervillains create the "perfect" universe.
Help Superboy-Prime and the Legion of Doom destroy the Teen Titans.
Defeat Cyborg and Shazam (all failed).

Supervillain
Zookeeper is a supervillain in the DC Comics universe and an enemy of the Teen Titans and Shazam (Captain Marvel).

Dr. Samuel Register alias the Zookeeper, was a skilled geneticist in charge of the Upper Lamumba Research Center in Lamumba, Africa approximately thirteen years ago. He worked alongside the scientists Mark and Marie Logan studying the biology of the local wild life. He despised their rambunctious son Garfield who constantly caused damage in his lab. He was (and still is) obsessed with people calling him "Dr. Register" and nothing else. One day, the Logans' six-year-old son, Garfield, encountered a rare green-capped monkey. The animal bit Garfield, infecting him with an extremely rare virus known as Sakutia. Mark Logan quickly culled together a serum that mutated the Sakutia virus, diminishing its lethal life cycle. However, Garfield still suffered from the contagion's side effects, which included green skin, and the ability to shape shift into different animals. Register was convinced that the Logans had inadvertently discovered the biogenetic missing link between animal and human.

After Logan's parents successfully cured Garfield of Sakutia, Register went on to try to finish their work. He became mad for results and inhumanly slaughtered animals in experiments which produced grotesque mutations. This earned him the nickname "Zookeeper". He later went on to secure a position at a government animal research center in Tampa, Florida. His tenure at the research center was rife with scandal with rumors circulating about the campus concerning his extreme and unorthodox practices. Unwilling to tolerate Register's eccentricities, the center terminated his employ. His work soon came to the attention of S.T.A.R. Labs, and they offered Register a position working at their San Francisco facility. S.T.A.R. placed him in charge of their abnormal and extraterrestrial disease program.

Register continued to experiment with biogenetics and accomplished many breakthroughs in his efforts to bridge the gap between animal and man. He eventually stole a sample of Sakutia virus from a CDC laboratory and began working on a process to create his very own animal army. During his procedures however, Register inadvertently infected himself with the Sakutia. He immediately began searching for a cure.

Shortly after infecting himself with Sakutia, Register discovered that the virus had mutated even further and had become airborne. Within a short span of time, every child under the age of thirteen within the San Francisco area found themselves suddenly shape shifting into a wide range of green-colored animals. As luck would have it, Garfield Logan, the only other person to survive Sakutia virus was presently active as a member of the Teen Titans known as Beast Boy. The airborne Sakutia virus altered Logan's biochemistry reversing all of its previous effects. He was no longer green, and could no longer transform into other animals. Logan eventually found Dr. Register and approached him for medical consultation.

By this point, the Sakutia side effects had begun to adversely alter Register's own genetic makeup. Rather than turning green like other victims, Dr. Register instead turned purple in hue. He believed that Logan held the cure to the virus inside his cell structure and rendered him unconscious with a tranquilizer dart. He prepared to cut Beast Boy open, when the Teen Titan known as Cyborg smashed his way into the laboratory, tackling Dr. Register. Register transformed into a giant serpent and carried his fight with Cyborg outside. Garfield knew that the only way to stop a changeling was with another changeling. He took a sample of Register's stolen Sakutia virus and re-infected himself, regaining all of his previous powers. Transforming into a giant green Tyrannosaurus Rex, he fought with Register on the streets of San Francisco. After getting in close, Beast Boy transformed into a Sydney Funnel Web spider and rendered Register unconscious with a poison bite. He also found a way to cure the kids that were infected. Apparently, Register is immune to Sakutia like Beast Boy. Zookeeper is arrested after his defeat.

Some time later, Zookeeper was one the supervillains recruited by Superboy-Prime as part of a new version of the Legion of Doom in order to destroy the Teen Titans. The other supervillains were Headcase, Indigo, Sun Girl, Persuader (Elise Kimble) and a new Inertia. Superboy-Prime also had three other clones of Superboy (formed from the remains of Match) to assist him. However, they are all defeated and Superboy-Prime is imprisoned within the Source Wall.

Zoo Keeper has evolved since encountering The Teen Titans. He is no longer purple or has a deep hue of blue. He has cybernetics surrounding his limbs and has been creating animals with human qualities similar to Doctor Moreau and the early scientific experiments of Doctor Anton Arcane. Zoo Keeper would later be defeated by Cyborg and Shazam.

Samuel Register before he became Zookeeper 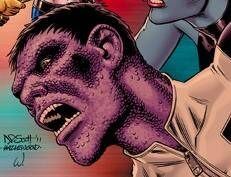 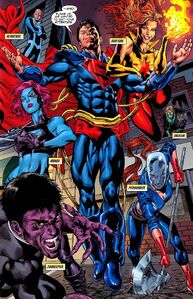 Zookeeper with other supervillains in Superboy Prime's Legion of Doom 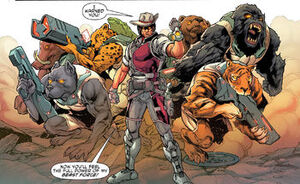 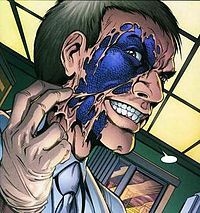 Zookeeper peels off his fake skin in Teen Titans vol.3 #13