Zorc the Dark One
Yami Bakura (particularly in anime)

Ruler of the darkness

Lord of the undead

Forcing people to play games with him.

Exterminate all life and plunge the world into darkness (both failed).

Zorc Necrophades (also known as Zorc the Dark One in the anime) is the overarching antagonist of the original Yu-Gi-Oh! series and the one behind the actions of Yami Bakura.

He is the Dark God who was created by the Millennium Items. He is by far the most powerful villain in the whole Yu-Gi-Oh! franchise. He feeds on misery and cruelty and he gains strength from the darkness and suffering of humans.

He was voiced by Yoshitaka Kaidu in Japanese and Mike Pollock in English.

Zorc Necrophades is an evil god who, by his own claim was born from the collective darkness of human hearts and was first summoned when the high priest Akhenaden created the Millennium Items.

When Bakura, King of Thieves got his hands on the Millennium Items, he summoned Zorc in order to gain his intense power for himself. Pharaoh Atem defeated the dark god and sealed himself and a remaining piece of Zorc inside the Millennium Puzzle to stop him but Zorc narrowly stopped his own demise by sealing a portion of his soul in the Millennium Ring.

This portion of his soul merged with the soul of Thief King Bakura and became Yami Bakura, the evil spirit of the Millennium Ring. Yami Bakura set in motion his evil plans to resurrect Zorc and though he is clearly up to something starting from his first appearance, his true objectives are never revealed til the final arc.

After Yami Yugi retrieved the three Egyptian God Cards and presented them to the stone tablet that documented his past life, he was sent into the World of Memories to live out his previous life as Pharaoh. While contesting with Bakura, King of Thieves, he failed to notice that the high priest Akhenaden had earlier encountered Bakura, who revealed that he knew the grisly origins of the Millennium Items. After attacking Akhenaden, Bakura escapes.

Akhenaden has visions of himself as a mummified heretic, who is in league with Yami Bakura. Yami Bakura had earlier managed to place part of his soul in the Millennium Puzzle, allowing him to spy on the Pharaoh and his friends who had ventured into the World of Memories to help him fight the looming threat. Akhenaden's dark side uses his ability to turn back time to undo the Pharaoh's last attack on Bakura, allowing him to strike back and steal the Pharaoh's Millennium Puzzle. Yami Bakura stalls Yugi and his friends.

Yugi, who was beginning to wonder why Yami Bakura seemed to know more than his thief counterpart, asked Bakura who he really was. Bakura revealed that at some point, Zorc sealed part of his soul into the Millennium Ring. Yami Bakura then declares that he is Zorc Necrophades. Meanwhile Bakura, King of Thieves escapes.

The next day, Dark Yugi and his priests had managed to track down Bakura, King of Thieves and after battling it out, they were able to fatally wound him. Yugi and the others notice that all the villagers have been frozen in time while the Pharaoh and his priests fight. They conclude that this is not really the past. It is then revealed that they are just avatars in a game world that Yami Bakura had constructed for this purpose. Dark Yugi was revealed to be Yami Bakura's opponent and while it seemed like Dark Yugi was winning, Bakura used his ability to stop time and allow Akhenaden's corruption to finally get the best of him. Akhenaden submits to the will of Zorc and steals the remaining Millennium Items, reviving Zorc in his true form.

Zorc easily defeated most of the Pharaoh's men and even managed to destroy the seemingly invincible Exodia, Blue-Eyes White Dragon and the three Egyptian gods (anime only with the former two set of monsters). In the end, Zorc was destroyed when the Pharaoh learned his true name, Atem and fused all three Egyptian Gods together into the Creator God of Light, Horakthy, whose rays of light alone were enough to completely destroy him.

With Yami Bakura and Akhenaden wiped out as well, along with the eventual destruction of the Millennium Items, Zorc was cast back into the void, this time with no hope of escape. 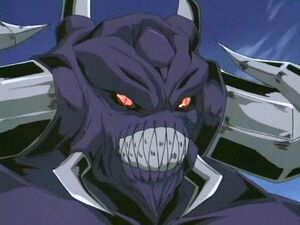 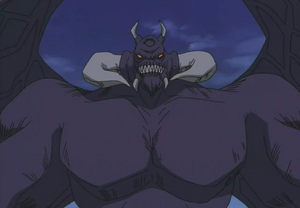 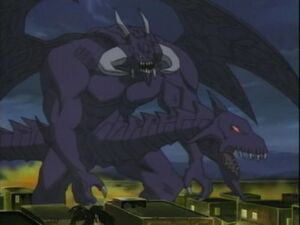 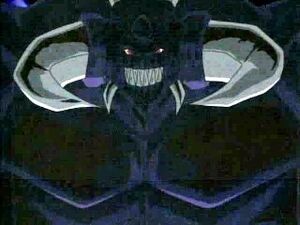 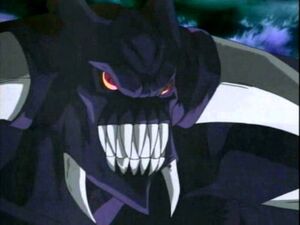 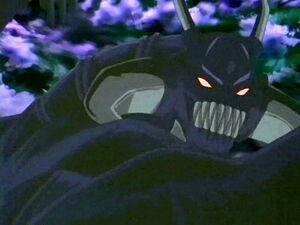 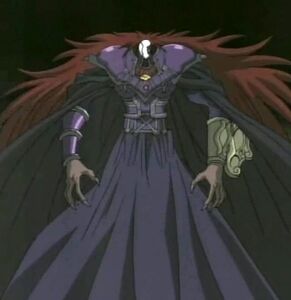 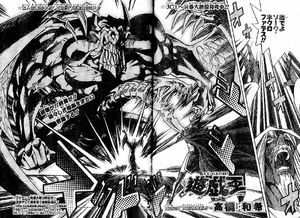 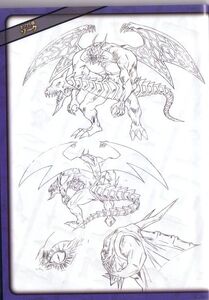 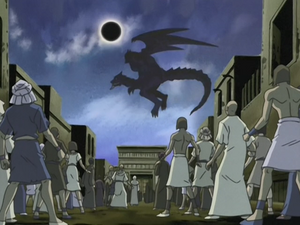 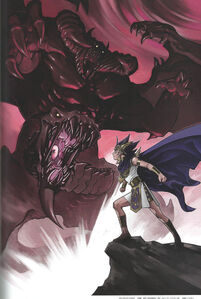