Zorran is a major antagonist in the children's TV show TUGS, and its American form Salty's Lighthouse.

He is voiced by Chris Tolluch in TUGS, and by Scott McNeil in Salty's Lighthouse.

Zorran is #1 of the Z-Stacks, and (as such) is the leader of the fleet. He is often described as devious, cunning and full of ideas to undermine his rivals, the Star Fleet. He is a harbor tug, along with his Z-Stack companions Zebedee and Zak, and his Star Fleet rivals, O.J., Warrior, and Big Mac. Known for being devious and manipulative, Zorran is often looked at as a pragmatic tug, as he is only devious as necessary as it is.

He is undoubtedly the most intelligent tug of the fleet, and always has plans to win contracts over the Star Fleet. However, one way or another, his schemes all blow up in his face, either from the incompetence of the other Z-Stacks or his own overconfidence. All tugs, including his Z-Stack companions, fear him, although the only tug Zorran himself is shown to fear is Hercules, and he has even been known to be insolent and insubordinate towards his boss, Captain Zero, which shows that even he can have cowardly tendencies.

Despite being a clear villain, Zorran has a good reason for being the head of his fleet. He is the most sensible and wisest tug of his fleet (although his wisdom is no match for O.J.) and as shown in Munitions, he is capable of handling dangerous and massive delivery of explosives, and he even goes as far as to not let other power-abusing tugs like Bluenose push him around, such as when he refused to move a munition barge when it was being unloaded by Big Mickey after Bluenose ordered him to do so. 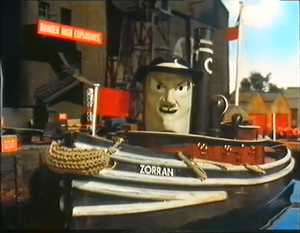 Add a photo to this gallery
Retrieved from "https://villains.fandom.com/wiki/Zorran?oldid=3460435"
Community content is available under CC-BY-SA unless otherwise noted.