The Dweller in the Depths

He has a cone-shaped body, a razor-fanged reptilian head like that of a Tyrannosaurus rex, four broad, flat, starfish-like arms with suckers, and a head of tentacles. How he swims or walks on the ocean floor is unknown, but it is possible that he has a slug-like foot similar to that of the Great Race of Yith.

Zoth-Ommog was imprisoned by the Elder Gods beneath the seabed near Ponape and R'lyeh. Like his older brother Ythogtha, Zoth-Ommog is served by Father Ubb and the yuggs. Zoth-Ommog's legend is chronicled in the R'lyeh Text and the Ponape Scripture.

(The Elder Gods as punishers of the Great Old Ones (a God and Satan theme) was not a Lovecraftian invention, but was introduced into the Mythos by August Derleth and carried on by a multitude of other Mythos authors, most notably Brian Lumley and Lin Carter.)

In Leigh Blackmore's sequel "The Return of Zoth-Ommog", Zoth-Ommog re-emerges on the island of Ponape and wreaks havoc until he is destroyed by an ancient ritual. 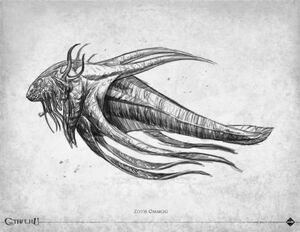 A sketch of Zoth-Ommog.
Add a photo to this gallery

Retrieved from "https://villains.fandom.com/wiki/Zoth-Ommog?oldid=3791056"
Community content is available under CC-BY-SA unless otherwise noted.