Zu is a child of Fog Mother whose true form is the Bee Woman and a major antagonist in Kamen Rider J.

Zu and her siblings were sent out by Fog Mother after the Fog arrived on Earth to obtain a sacrifice for her to awaken her brood. Spotting Kana and Kouji and deciding Kana would make a perfect sacrifice, Zu kidnapped Kana while Agito killed Kouji. After Kouji returned as Kamen Rider J and killed Agito, Zu was sent to kill J and avenge Agito. Zu initially summoned red ribbons to trap Kouji and drop him from the sky before revealing her true form as Bee Woman. Kouji then assumed his Rider form and fought Bee Woman.

Despite Zu shooting Kamen Rider J in the arm with one of her needles, J was able to overpower her when she lifted him in the air, causing both of them to crash into Fog Mother's ship and cause Zu to be killed by the impact. 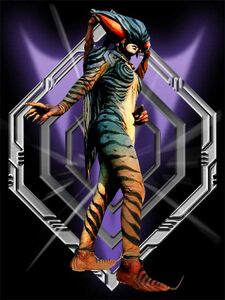 Bee Woman
Add a photo to this gallery
Retrieved from "https://villains.fandom.com/wiki/Zu?oldid=3057850"
Community content is available under CC-BY-SA unless otherwise noted.