Zuboo is a minor antagonist and a Demon that appears in the Amon: Apocalypse of Devilman OVA. He is a frog-like Demon with strong morphing abilities.

He was voiced by Hirotaka Suzuoki.

Under the guise of a salaryman, he goes around hunting defenseless humans. Judging from his behavior when chasing down Yumi, it is heavily implied that he may have some pedophiliac tendencies with his prey being young women and girls.

Hunting down a meal he reveals his true form to the young girl, Yumi, and uses his tail to constrict her. Finding out Yumi is one of the Devilmen, he is ambushed by Miko's acid spray and melts. Zuboo grabs Miko's leg and resurrects from his pile of melted flesh into his second form. Zuboo then begins stretching out Miko's pelvis with the intent to break her legs, and slamming her into the alleyway wall, Akira shows up and assaults the former. Enraged that Akira had attacked him, Zuboo tries to counterattack him with his Hovering Pinball, but is absorbed into Akira's fist. 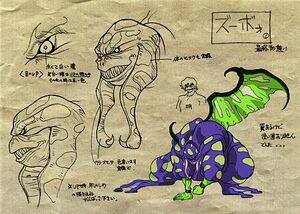 Zuboo's concept art.
Add a photo to this gallery
Retrieved from "https://villains.fandom.com/wiki/Zuboo?oldid=3885792"
Community content is available under CC-BY-SA unless otherwise noted.