Zure, Knight of Dark World, simply known as Zure is a minor villain in Yu-Gi-Oh! GX, and the right-hand man of Brron, Mad King of Dark World.

He was voice by Scottie Ray.

Zure is a Fiend Type Monster, that looks more like a skeleton with a dark grey armor and a black cape.

Zure was the right-hand man of Brron. When he found out that Jaden and his friends were close, he waited for them to head to the stronghold. Jaden challenged Zure to a duel. Zure was about to win the duel until Freed, and warrior who's trying to rebel against the Dark World Army, came and scarified his soul to help Jaden win the duel. After Zure was defeated five orbs were transplanted into five of Jaden's friends; Alexis, Chazz, Atticus, Hassleberry, and Cyrus, so Brron can use the Super Polymerization spell card. Zure was later revived when Brron summoned him onto the field, but was defeated soon after. 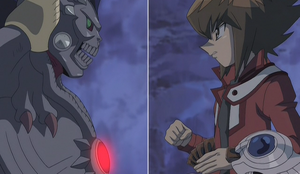 Jaden Yuki fights against the Zure. 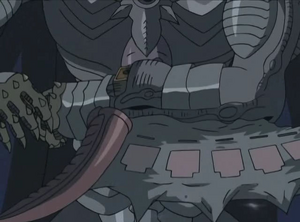 Zure's Duel Disk.
Add a photo to this gallery

Zure's deck is a Power Deck. His strongest card is Power Annihilator.

Retrieved from "https://villains.fandom.com/wiki/Zure?oldid=2932075"
Community content is available under CC-BY-SA unless otherwise noted.