The Zurg-Bots are fictitious minor antagonists in Toy Story 2, and the secondary antagonists of the Toy Story Disney Infinity Playset. They are the robotic henchmen of Emperor Zurg.

During the video game opening, the bots appear when Buzz Lightyear lands on Zurg's planet. Surrounding him in all sides, the bots wield out their laser guns and weapon and tiny versions of themselves sprouting out from their shoulder armors. Thinking very fast, Buzz spots a giant crystal and shoots it with his laser, and sending hundreds of lasers through the robots. This causes a chain reaction which not only strike the robots, but also caused them to engulf in a large explosion to which Buzz nearly survives.

They also appear in the Toy Story Disney Infinity Playset. This time Buzz can destroy them with Woody and Jessie at his side. 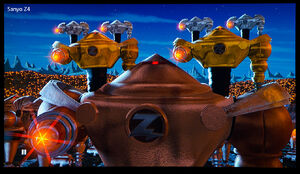 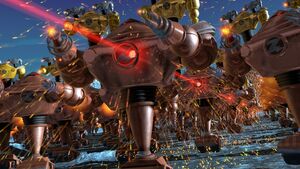