Make Tarzan do whatever he says.

Zutho is a mandrill who served as the main antagonist of The Legend of Tarzan episode "Tarzan and the Face From the Past".

He was voiced by Jason Alexander, who also played Abis Mal in the Aladdin franchise.

Tarzan and the Face from the Past

As children, Tarzan, Terk, and Tantor crossed forbidden side of the river. They first met Zutho and his friends when they threw fruit at them behind a bush. Tarzan dropped fruit on them with his spear and they were impressed with it. Zutho persuaded Tarzan to teach him, Gozan and Hungo how to make spears. While Tarzan was teaching them, a fire broke out and nearly destroyed the jungle, but luckily the rain came and put it out. Zutho blames Tarzan for the fire and calls him a bad influence. When Zutho plans to tell Tarzan's adoptive mother Kala what had happened, Tarzan begs him not to, to which Zutho says that the boy owes him and will come back someday; either tomorrow, next year or 20 years from then.

20 years later, Zutho comes to a now adult Tarzan for his favor to be fulfilled. He wished for Tarzan to deal with howler monkeys that kept him and his friends awake at night.

Eventually with help from Jane, Terk and Tantor, Tarzan admitted what had happened on the day of the fire to Kala, who dealt with Zutho. 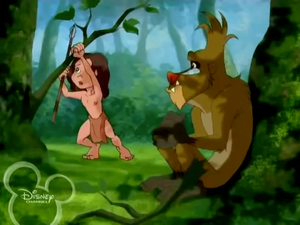 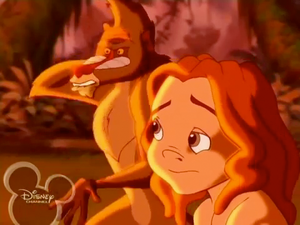 Zutho and Tarzan after a fire breaks out 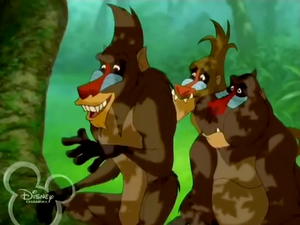 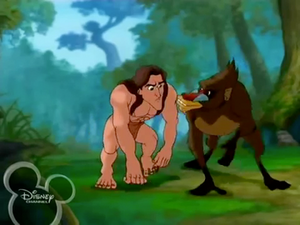 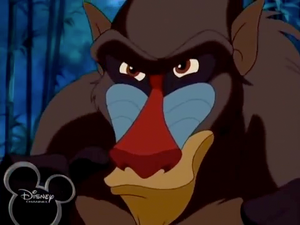 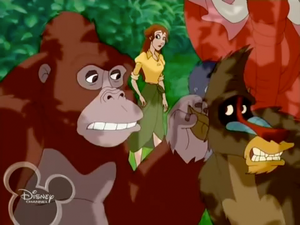 Zutho being punished by Kala
Add a photo to this gallery

Retrieved from "https://villains.fandom.com/wiki/Zutho?oldid=3757475"
Community content is available under CC-BY-SA unless otherwise noted.